Who can copy a text faster: a pen, a printing press, or a coder?

At the beginning of Michaelmas Term 2021, Digital Scholarship @ Oxford collaborated with the Bodleian Libraries’ Centre for the Study of the Book to put on a rather unusual race. Pitting three methods of text production against one another, Script/Print/Code was a public demonstration of the possibilities and challenges presented by calligraphy, typesetting, and coding. 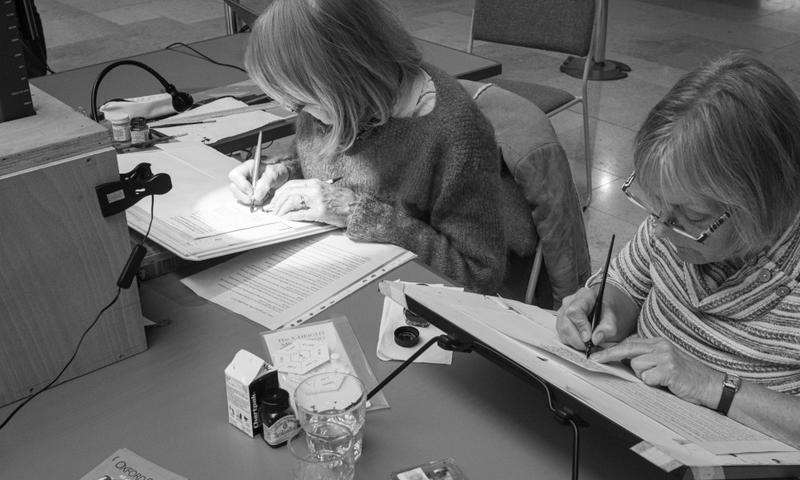 Two calligraphers work to transcribe a passage of the Gutenberg Bible during the Script/Print/Code event.

The race coincided with one of the Bodleian’s Lyall Lectures, this year celebrating Gutenberg’s Bible. The participants were set the task of transcribing a portion of a psalm. Over the course of three hours, two calligraphers, two typesetters, and one coder made their transcriptions of Psalm 107, 21-43, testing the limitations of their media within the available time, and answering questions from the public as they went along.

In the 2020s, with the arguable emergence of a post-digital culture, it is easy to forget quite how remarkable a shift has been created by the computers with which so many of us work. The calligraphers shaped each letter with a stroke of their pen, progressing painstakingly from word to word, transcribing perhaps a third of the psalm. Working with a hand-press, the typesetters formed their text blocks, printing a first proof in the last minutes of the race. In the same time, sat with a laptop and a cup of coffee, the coder was able to type out the psalm, frame it in html/css, upload it to the internet, and produce a simple webpage about the event available to anyone in the world with access to the internet.

Of course, we knew that this was how it would be. We knew that scribal techniques were time-consuming and materially expensive, limiting written sources to audiences who could afford the production of a near-unique manuscript, each more or less a work of art. We knew that in printing, a great deal of time and effort is expended in the typesetting, the creation of the blocks of text for printing, before the press gathers pace, stamping its way towards the cliché of mechanical reproduction. We knew that typing into a computer would be so small an effort that a means of publication had to be built into the challenge for the coder. 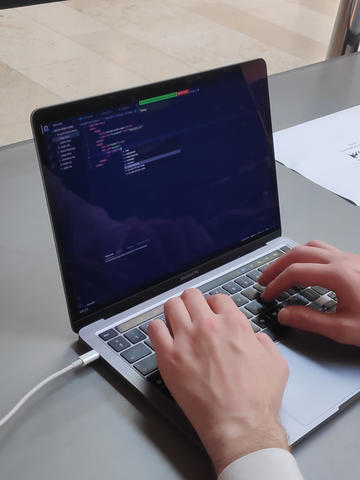 The author codes a Gutenberg psalm in the Script/Print/Code event.

As a matter of convenience, I was the sacrificial coder for the event, and had time to watch my colleagues at their work and consider what I was doing in light of their activities. Like them, I prepared a surface, set the layout of my page, selected my palette of letterforms, and made and corrected errors as I transcribed. I could have gone full digital, employed a camera and an optical character recognition system, but I did not think of that at the time. As I typed, electrical signals in binary code, the black and white medium of the digital, fired through the microcosm of circuitry that is a modern laptop. Scripts ran in response, printing letters, words, verses to the screen. More scripts copied the information to a server, and, finally, delivered it, like a printed page, to the screens of those accessing the website.

In the end, the evolution of textual transmission, from the oral tradition, to manuscript, to print, and to digital is not a linear one; nor is it a revolution of casting out the old in its entirety. The languages of form, of process, of production remain. Putting a text onto a website may not be printing or calligraphy or even recitation, but it is a part of the rich culture of text and how it is captured and transmitted, encoded and decoded. One of the major advantages touted for digital culture is that of multimodality, of multimedia experience for the end user, and yet text still dominates, is still the most rapid and efficient of its communicative forms. The computer may have changed how we work, how fast we can do things. Certainly it is beginning to impact upon how we think. But it is a product of us and our cultures, and how we use it and speak of it is shaped by our history.